Algonquin Provincial Park is littered with picturesque spots; someone could probably do a 365 sights blog on just the park itself. However, one view offers a truly spectacular and uncommon vista, and that’s the sight you see from the lookout on Lookout Trail.

The ultimate goal of the 2 km trail loop in Algonquin Provincial Park is the cliff overlooking acres upon acres of forest. Since the region is in a transition zone between different types of forest, there’s a huge mixture of plant life in the area, and in the fall it becomes very apparent when you’re sitting above it all. The cliff offers a view of all the shades of fall, with evergreens and broadleaf trees creating a patchwork of green, orange, yellow and red stretching out below. It’s one of those places that’s almost too classically good looking to be real.

While fall offers a vibrant sea of leaves below, the view is something to behold most of the year. No matter what it offers a great view of the parklands below and an idealized version of unending Canadian forests.

Spring time from the lookout. | Image from Flickr/Suburban Tourist via CC BY NC ND 2.0 | 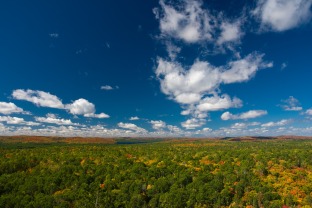 Getting there is doable for most, but is, again, only an option for those with a vehicle and able to do a bit of a hike. The trail is located in the southern-central region of the park, about a four-hour drive from Toronto. It’s likely easier to stay in the area and make the trek as part of a day trip to the park, in which case there are hundreds of accommodation options in the area (since it’s a major tourist attraction and near a huge population center).

The trail itself is located just off of Highway 60 as you drive through the middle of the park. While it’s marked, there are other trails in the area that may distract (though also worth exploring).

Algonquin Provincial Park as a whole is a National Historic Site and TripAdvisor users have ranked Lookout Trail one of the top things to do in the park. The park has an extensive website, including a section on the trail.

In only three or four weeks this will be the view from Lookout Trail. Lake of Two Rivers, our home here in Algonquin is visible in the distance. The trail is a short drive from Killarney Lodge and its one of the most beautiful in Algonquin.#killarneylodge #imagesofcanada #algonquinpark #spring #explorersedge

Editor’s Notes —This is an updated version of the post I published last year when I took the first swing at this project.