Despite Canada’s age, there are ruins of all sorts across this country.

Books have literally been written about this place.

Really SGang Gwaay is one of the most famous historic sites in Canada, and it’s not just for its history, but for the beautiful if slowly decaying art standing amongst the west coast forest.

A quick look at the history (this is almost criminally short). The Haida are one of the major First Nations on the west coast of North America, residing throughout Haida Gwaii (formerly known as the Queen Charlotte Islands). When Europeans arrived disease ripped through their villages, killing a massive percentage of the population.

Having been a powerful and culturally advanced and complex society, the villages that had to be abandoned were not insignificant. A few of them still remain to some degree now, with the sites of longhouses still apparent.

However, likely the most famous aspect of Haida culture are the totem poles (many other indigenous people along the west coast also had totems, they aren’t just a Haida item) and some still stand. I’m not sure how old the poles are, but being that the site was mostly just a camp in 1875, they’re a minimum 150 years old.

You might see three names up there, that’s due to Europeans using the names of chiefs instead of the name of the village in the Haida language, so depending on what you’re reading, one of the three could be used, but all refer to essentially the same place (either the small island or the village.

I could write quite a bit more about this place, but I’ll leave it to you to research a bit more. It should be noted that while famous, it’s not an easy place to visit. 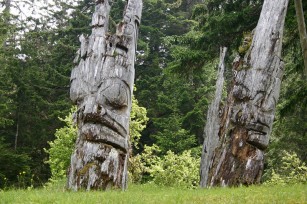 Getting there isn’t the easiest task. Located on the island currently called Anthony Island (which is tiny), the ancient village is on the southern end of the archipelago. The whole of Haida Gwaii is sparsely populated, and the southern region even more so, so popping over from the neighbouring town isn’t really a plan.

Really, the only way for most people to get over is with a professional tour operator. That has the added bonus of someone explaining things, which is important since you’ll get a better idea of how Haida society and spirituality works. The downside is they can run up to the thousands of dollars.

There are a variety of tour operators, best research them yourself.

As it’s part of Gwaii Haanas National Park, SGang Gwaay doesn’t get its own profile on TripAdvisor, but the park does rate extremely high. It’s also a UNESCO Heritage Site, and has a couple federal designations (see it’s official site here). Simon Fraser University has put together a decent (if academic) piece here, if you want to learn more. And there’s lots more material out there, depending on what you want to learn more about.

It's National Indigenous Peoples Day! Step into the magical world that is Gwaii Haanas National Park Reserve where you’ll be amazed by these massive weathered poles that line the beach at SGang Gwaay. Learn about this #UNESCO World Heritage Site as you listen to stories of tradition and culture told by Watchmen, one-site guardians eager to share their knowledge with you. . 📷: @sonia.sayle . . . #NIPDCanada #gwaiihaanas #gwaiihanaasnationalparkreserve #gwaiihaanasNPR #haidawatchmen #bc #firstnations #haida #sganggwaay #haidavillagesite #explorebc #tourismbc #totempoles #standingpoles #parkscanada