Some more red geology for you.

The Red Rock Canyon lives up to its name. The colour of brick, or occasionally more vibrant, the canyon cuts through a green forest creating a great juxtaposition of colour. With a stream bouncing off boulders, rocky mountains on the horizon and a blue sky, it looks like something out of a novel from 70 years ago.

Making it a little different are the bands of colour running through the stone, bringing in some white stripes. A very Canadian touch to the geology of the area.

The rough landscape hides, to a certain extent, a trail system around it, giving people access to lots of different views. The bridge across the canyon gives the most popular view, but there is lots to explore here, with waterfalls, forest canopies and lots of curves carved by millennia of water spilling through.

Waterton is, in general, a beautiful area as well, and part of a UNESCO site. 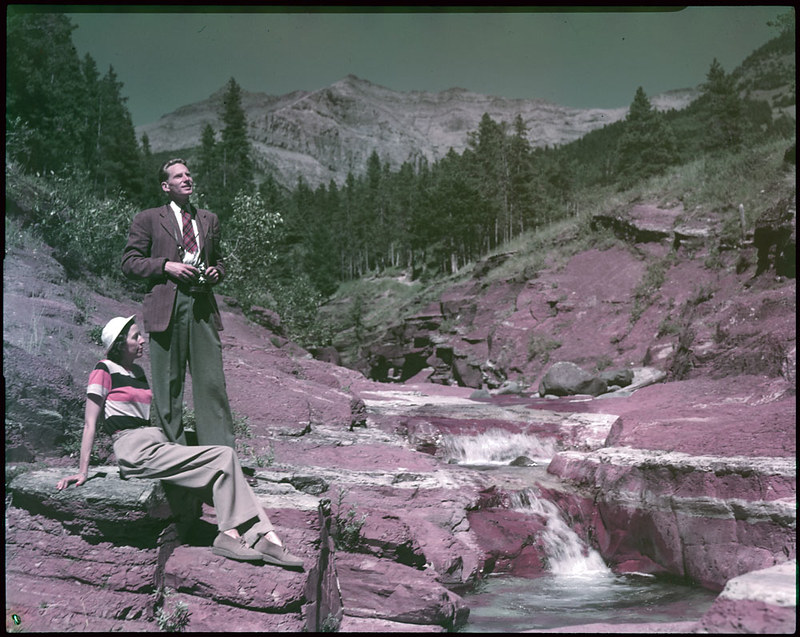 | Image from Flickr/Library and Archives Canada via CC BY 2.0 |

It’s about half-an-hour outside of the hamlet of Waterton, inside the park, but the road is closed occasionally (right now it’s closed because of winter, I believe). Looking into whether that road is open is a must before planning this one.

It’s also about a two-hour drive from Lethbridge, which puts on the long end of a day trip, but with the beauty of Waterton along the way, that’d be a fun day.

It’s in a National Par, so you’ll have to pay the fee to stay in the park, but that should be it. However, it’s not close to anything, so accommodation is probably something to plan for in some way.

There are a fair number of things to do in Waterton, so placing 8 on the list isn’t bad (on TripAdvisor). Travel Alberta, the official tourism site for the province has its profile on the canyon here.  For more info on the park in general, the National Parks site is here. And finally, for a bit more info on the hike, check here.