Ok, the kid in me is excited about this one.

I’ll admit some bias on this one (really, this whole project is rife with it). I loved dinosaurs when I was a kid. Way beyond the usual…right, this is about the World’s Biggest Dinosaur, not my childhood.

Drumheller has invested a lot in its dino attractions, with dozens running around town, all thanks to the history of fossil finds in the area.

However, the highlight by far is the giant Tyrannosaurus Rex down by the river. The 86 ft tall structure is built of fibreglass and steel, with a staircase inside it. That’s pretty different (and considerably larger) than fossils show T. Rexs to be.

However, it’s a tourist attraction, not a scientific model. And as an attraction it’s a lot of fun. I’m a particular fan of the shots from a distance. Close up people pose like it’s gonna get them, and that’s all well and good, but the towering dino head peaking above trees and buildings like it’s actually roaming the streets of a midsized Albertan town is always hilarious to me. 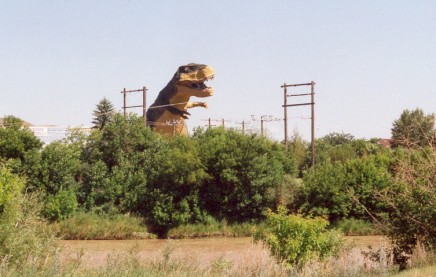 Drumheller is probably worth a short trip just by itself, when you include the region around, with the Tyrell Museum and the badlands/hoodoos. However, at an hour-and-a-half east of Calgary, this is within a day trip, I think. Maybe consider it a long day trip or part of a weekender with some camping.

It’ll cost you $4 to go up the thing. It’s an ok view up there, so I guess it’s worthwhile? But the better view is ground level, IMO.

Suprisingly, to me at least, this is ranks 11 on things to do in Drumheller, via TripAdvisor. Maybe it’s the child in me, but I think it earns a look. There’s lots of info about it online. There’s an official site, just for it. There’s an AtlasObscura profile. And there’s even a Roadside America profile.